I’ve been using the Apple Magic Keyboard for a week or two so far, and I felt it was time to put together some thoughts in the form of a review. It’s expensive, yes, but does it live up to the price tag? 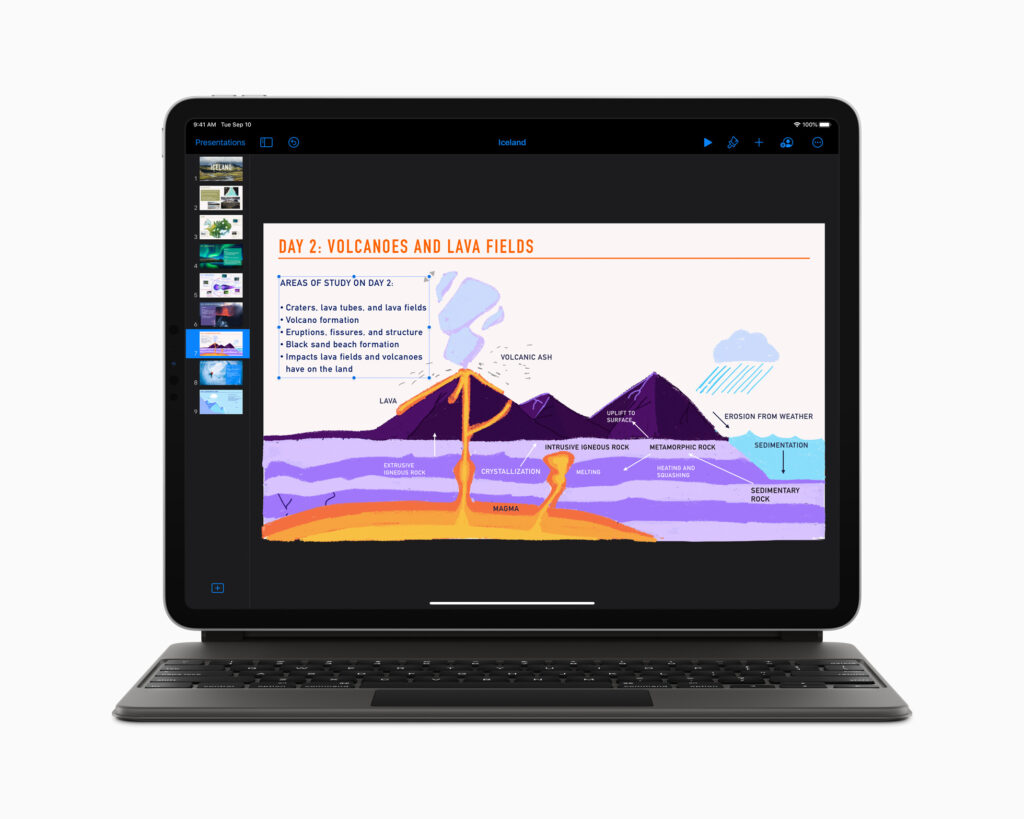 The iPad, like the iPhone before it, has always had an on-screen keyboard that’s likely to be absolutely fine for the majority of people. For me, and perhaps due to my line of work, writing on an iPad using the on-screen keys has been fiddly at best, and infuriating at worst (one of the reasons I moved to my current 12.9-inch model was for a full-sized keyboard).

I’ve previously reviewed the Brydge keyboard for iPad Pro, and it was, for me, a much better product than Apple’s Smart Keyboard Folio. No disrespect to Brydge’s excellent offering, however, but the Magic Keyboard somewhat blows it out of the water (albeit for a cost). 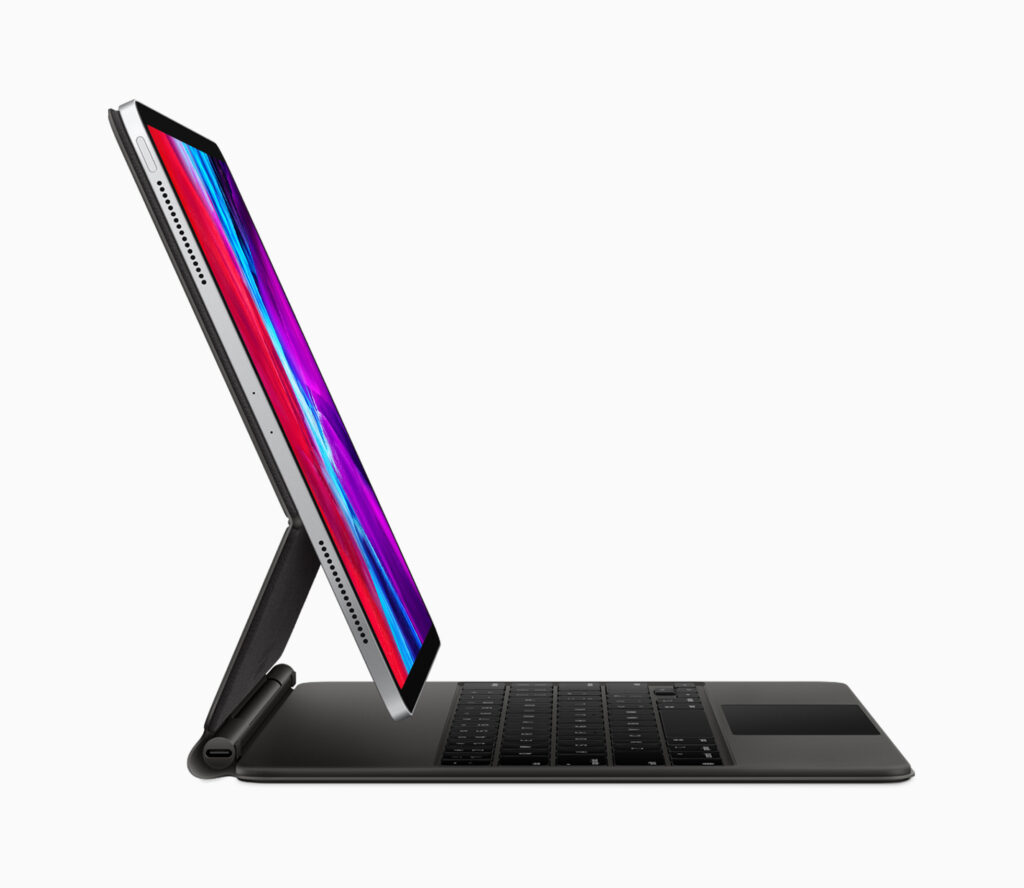 The first thing you’ll likely notice is the ease of setup, by which I mean there… isn’t one. Because the keyboard uses a series of magnets, as well as drawing power from the iPad Pro’s smart connector on the rear, you’re good to go.

After that, the case/keyboard hybrid’s design comes into its own. With an almost-full-sized keyboard, with the iPad able to tilt back and forward while floating above the keys, it’s a sight to behold.

To counter-balance the iPad’s weight, the keyboard is heavier than you may expect, essentially doubling the weight of the iPad as a whole and bringing things closer to a MacBook in terms of overall heft, but there’s one thing that makes me want to reach for it, rather than my MacBook Pro – the fun factor.

The iPad Pro Is Now A Tablet For Work and Play

Whenever I need to write up a quick draft, send an email too lengthy to type on my phone, or even just run through my weekly planner, I find myself reaching for the iPad. I can grab the device and the keyboard, prise it open (which is essentially impossible with one hand, as smooth as the mechanism is), and begin tapping, or clicking, away.

I say clicking because while the keyboard gets all the attention (and the name), the trackpad is similarly well-designed. Unlike the monolithic ones you find on MacBooks, this is much smaller, but no less capable. The entirety of its surface is clickable, and combined with iPadOS’ mouse support, it works well when navigating the OS or inside apps and Gestures allow you to work on multiple apps at once, return home, open Spotlight search, and more.

It’s not quite perfect just yet, with some apps not taking advantage of it entirely, but that least seems to be growing smaller every day (although I often use my MX Master 3 mouse if I’m at a desk, anyway).

Another key part of the aforementioned fun factor is how easy it is to remove the iPad. You can hold the keyboard upside down and give it a shake and the iPad will stay in place, but by holding the keyboard and gently pulling the iPad, you’re able to enjoy your tablet in handheld mode, before setting it back down. It’s one of those things that’s hard to describe, but has that signature Apple feel.

Any Port In A Storm

iPadOS bought with it a wealth of features for Apple tablets, and combined with the iPad Pro’s USB-C connectors the big addition was undoubtedly the ability to plug in thumb drives, portable HDDs, and even cameras to import and edit files directly on the tablet.

Unfortunately, that process has a bottleneck of sorts in that the iPad Pro only had one port, meaning if you were working with large files, you weren’t able to charge.

Thankfully, the iPad Pro has an impressively elegant solution. Unlike the Brydge alternative that requires a USB-C cable to charge, the Magic Keyboard not only draws its power from the iPad itself, but it can provide power through a subtle USB-C port tucked into the hinge.

Only visible from the side of the device, the port doesn’t transfer data, but it does allow you to charge the iPad while working on an external device. While using the keyboard drains the battery of the iPad a little quicker, the adjustable backlighting is optional, so it doesn’t need to be on if you’d rather keep power usage to a minimum — although irritatingly it requires diving into the settings app to adjust.

For all of the positivity, there are a few quirks with the Magic Keyboard that mean it stops short of perfection.

For one, there are no function keys. While their absence may not impact many, it looks as though there’s just enough space for them without hitting the tablet with your fingertips. There’s also no Escape key, which means you’ll perhaps find yourself prodding at the screen for a little “X” in some apps a little more than you’d like. You can re-map buttons, but only a certain set — it seems a shame that I can’t remap one of the lesser used keys to an Escape function.

Finally, the case offers decent protection for the front and rear of the device, but the edges remain exposed. If you’re taking your iPad out and about constantly, you’ll almost certainly want to put it in a bag as opposed to holding it under your arm, just to be safe.

I love my iPad Pro, but the Magic Keyboard has taken things to the next level. If you do anything on a daily basis involving a wealth of text, I can’t recommend it enough, despite the high price.

The ability to charge while working is a huge boon, and the combination of excellent keyboard and trackpad hardware as well as a gorgeous design make it the best option out there for Pro users.