How’s it going, folks? It’s been a while since my last blog post, simply because life has been a bit crazy – what with this lockdown and everything.

In truth, before Jackson I’d have been quite happy to stay indoors as much as possible, bingeing TV shows and movies, but when you have an (almost) one-year-old, things get a little more hectic. With that in mind, we’re currently spending some time at Frankie’s mum’s house having swapped homes for a few weeks. It means Jackson has a garden to play in, and Frankie and I get to separate the work and family parts of our lives a little bit more because I can work in another room (which has led us to conclude that our home needs a switch around once we get back!). 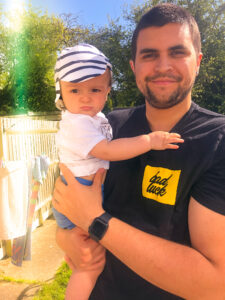 With that in mind, I’m putting together another post based around my new portable setup which you’ll be able to see very shortly. It’s taken a lot of the stress out of moving office spaces, that’s for sure.

We’ve also found new ways to interact with friends, and both Frankie and I have been enjoying Mario Kart tournaments with friends which stops us going too crazy at being locked down together!

You may have noticed despite the current economic situation that my portfolio has continued to grow at a fairly steady pace. That makes me one of the lucky ones, and I’m so thankful because, hey, it’s not like anywhere is hiring at the moment so there’s no real safety net if this doesn’t work out!

On the plus side, Gfinity has been going from strength to strength this month, hitting over 21 million views in April. When I started in February, our target was single-digit millions, and to reach such a milestone is huge. Our team puts in a lot of effort, and I’m happy to be a part of it. In fact, I’m very pleased to say that I’m now a “Senior News Writer” for Gfinity, so subject to signing a new contract you’ll be seeing a lot more of me on the site! Considering how my short tenure at Reach went, I’m glad that I was able to turn that disappointment into something positive.

Anyway, keep an eye out for more content coming soon, including my review of the obscenely big (but still beautiful) LG monitor I posted on social media last week, as well as my first review content for Gfinity.

Oh! And one more thing. I’m going to be posting a short, two-sentence recommendation or two after each of my blog posts again. These could be music, comic books, movies, or games. Check it out below!

Deliciously dark and yet rammed full of macabre humour, Killing Eve Season 3 has begun and it remains one of the best shows on TV right now.

DGD became one of my favourite bands with Instant Gratification, which I was obsessed with while we recorded the first Counties EP.  Afterburner might actually be better, with the band’s unique style being refined with every album since they added Tilian on lead vocals (seriously, that voice is insane!).